We have tried to simplify this here:

Who, whose and whom is used when referring to people.

which is used when referring to a thing or an idea.

that is like a joker and can be used for both.

Who refers to a person.

"The person who attended my call was very helpful."

"Thomas Edison was the scientist who invented the light bulb."

"Who ate my sandwich?"

Whose refers to ownership and is the possessive form of who.

"Whose seat is this?"

"This is John, whose wife works at the bakery."

"I found a wallet but I don’t know whose it is."

A difficult relative pronoun is whom. Whom is used as the object of a verb or proposition.

"To whom do you wish to speak?"

"Whom should I talk to about this problem?"

"I had an uncle in America, from whom I inherited some money."

We recognise that it can be a challenge to distinguish between who and whom but following some simple tricks will make the choice a lot easier for you:

Who can be substituted by he/she/ because it is used as the subject of a verb.

Whom can be substituted by him/she because it is used as an object. 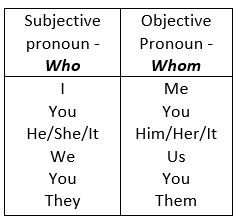 Now let us have a look at the sentences once again:

"The person who attended my call was very helpful."

Who is, therefore, the correct choice here.

"Thomas Edison was the scientist who invented the light bulb."

The same thing, he invented...

"Who ate my sandwich?"

Whom is always the object of the sentence. Note that you sometimes need to rearrange the sentence a bit for it to make sense.

"To whom do you wish to speak?"

(Whom is the object of the verb speak) here you can substitute whom for him/her in the sentence. "Do you wish to speak to him/her?

"Whom should I talk to about this problem?"

The same thing “should I talk to him about this problem?”

"You gave the gift to whom?"

Again, whom is the object of the verb talk and can be replaced by him/her.

"Betty went with whom yesterday?"

Replace whom with him/her

If “he” or “she” fit in the sentence, who would be the right choice

If “him” or “her” fit in the sentence, whom would be the right choice

When to use that/which is another grammatically confusing question.

To use the right word, we need to distinguish between restrictive and non-restrictive elements.

That is a restrictive element.

Look at this sentence:

"Our room that has a painting on the wall is big".

Which Is a non-restrictive element.

Now look at this sentence:

"Our room, which has a painting on the wall, is big".

Now, you should know the meaning and difference between these two sentences:

"The man that paints the wall is hired by the supermarket"

"The man, which paints the house, is hired by the supermarket"

Your satisfaction is ensured by a 10 days warranty.

If you can get a better price, we'll match it!

Are you in a hurry? Contact us by phone for a rapid delivery!